I crashed my merlin. RIP.

So i bought another merlin. we will call this one merlin #3 haha.
I rekeyed it at base, it flung into the air and exploded.

Epoch ate 2 of my merlins 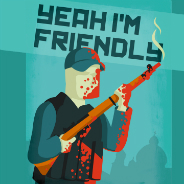 Posts : 253
Join date : 2017-08-05
I will grant you a refund to the value of two Merlins, hit up one of the staff when you come online, if you cant find one of us in a timely manner, just post here again letting me know, and I will set up a collection point for you..

My base is just south of the NWAF, and there was a mission up there (forget what it was). I cleared the mission of AI and started driving to the crate in SUV when I noticed land mines all over the ground. I thought I was steering between a couple of them when Boom! my suv explodes and it flings me in the air. I landed and somehow survived and was barely able to get myself bandaged before bleeding out.

I'm thinking "alright I'm only like 700m away from my base"... it takes me fifteen minutes to get there because I keep passing out, and I'm hoping that no zeds eat me while I'm unconscious. Finally get in the base and get myself a much needed blood bag. I lost an SUV, but I'm good.

I get into my military off road that I scavenged from a bandit patrol, and I head up the hill behind the base to go back and loot. While maneuvering between the wall and the fence, I hit a lag spike, and it made me veer too far to the right and directly into the sharp edge of the wall. Just like that, my RF Wheel and my engine are toasted. For ground vehicles I only had the truck and SUV at the time, but I did have a civilian heli that could lift. So I ran back to the base, again, but this time to grab the chopper. My plan was to lift it up and off the wall it was stuck on and carry it back to the base and use my fuel pump to repair it back to new.

So I get over to the truck. I'm auto-hovering. I get the truck lifted. I raise my altitude up to about 30-35m so I can get over the trees between me and the base. And when I go to turn off auto-hover I accidentally chose the wrong scroll wheel option and dropped the truck instead. I was really hoping it would survive the fall from only? 30-35m... but no, it hit the ground, waited about 3 seconds then exploded.

So I cleared the mission, but lost 2 ground vehicles in doing so. And afterward all I could think is "well that's DayZ for ya".

Shit like that happens all the time and part of the fun is just going with those mistakes and accidents and recovering from them.

Re: The Merlin Saga